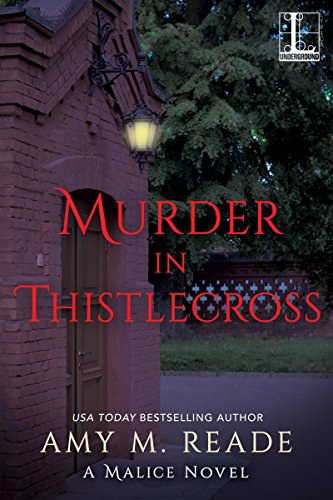 The emerald hills and violet valleys of Wales seem the ideal place to start over after murder—and divorce—shattered Eilidh’s life in the Scottish Highlands. But within the stone walls of an ancient castle, a family’s dark, violent past threatens much more than her newfound tranquility . . .

For the past two years, Eilidh has called the quaint Welsh village of Thistlecross home, embracing her new life as estate manager of a restored fifteenth-century castle. But the long-anticipated arrival of her employer’s three estranged sons and their wives transforms Gylfinog Castell from a welcoming haven to a place seething with dangerous secrets. When the escalating tensions culminate in murder, Eilidh must sift through a castle full of suspects both upstairs and downstairs. She can trust no one as she follows a twisting maze of greed and malice to ferret out a killer who’s breaching every defense, preparing to make Eilidh the next to die.

Set in a beautiful Welsh castle, it was only a matter of time before the crumbling ruins would expose a killer in this excellent mystery.
The story begins with a pending reunion between the Mistress of the castle, Annabel, and her children and their partners. From the outset, it’s clear that the meeting will be fractious. The family lived through years of horrendous abuse dished out by Annabel’s first husband, father to the three boys. A great of animosity lives on, as the boys still resent Annabel for not protecting them. This meeting is her chance to put her side of the story to them, and maybe build a few bridges.
The story of the wealthy Tucker family runs along that of the estate manager, Eilidh, and the cook Maisie and her daughter Brenda. There is a delightful ‘Downton Abbey’ vibe when Annabel presses a floor button to summon the downstairs staff.
Eilidh is a woman I’ve met before in this series, and the author carefully intersperses details of her life from previous books without spoiling the current story. Her journey with Griff to the fairy glen is both sweet and atmospheric, sprinkling a little magic around after the dreadful events that continue to occur to the castle’s inhabitants.
With plenty of Welsh influences, the story has a realistic feel, including the odd “iechyd da” thrown in for good measure.
The tale picks up pace – enormously so – towards the end, as the mysteries are resolved, revealing a well-developed suspense along with a very compassionate look at what drives someone to want to maim or kill another.
All in all, a cracking mystery blended with believable characters, a little romance, revenge and not to mention huge empathy for those who make mistakes for all the right reasons.
Long may Eilidh and her family & friends continue.

Recommended to lovers of mysteries, women’s fiction, and British scenery and settings.

You can get your copy here, and while you’re there, why not check out the other books in the Malice series and meet Eilidh yourself?

The House on Candlewick Lane

It is every parent’s worst nightmare. Greer Dobbins’ daughter has been kidnapped—and spirited across the Atlantic to a hiding place in Scotland. Greer will do anything to find her, but the streets of Edinburgh hide a thousand secrets—including some she’d rather not face.

Art historian Dr. Greer Dobbins thought her ex-husband, Neill, had his gambling addiction under control. But in fact he was spiraling deeper and deeper into debt. When a group of shady lenders threatens to harm the divorced couple’s five-year-old daughter if he doesn’t pay up, a desperate Neill abducts the girl and flees to his native Scotland. Though the trail seems cold, Greer refuses to give up and embarks on a frantic search through the medieval alleys of Edinburgh—a city as beguiling as it is dangerous. But as the nightmare thickens with cryptic messages and a mysterious attack, Greer herself will become a target, along with everyone she holds dear.

Trading the urban pace of Edinburgh for a tiny village overlooking a breathtaking blue loch was a great move for budding photographer Sylvie Carmichael and her artist husband, Seamus—until a dangerous crime obscures the view . . .

Sylvie’s bucolic life along the heather-covered moors of the Highlands is a world away from the hectic energy of the city. But then a London buyer is killed after purchasing a long-lost Scottish masterpiece from Seamus’s gallery—and the painting vanishes. As suspicion clouds their new life, and their relationship, Sylvie’s search for answers plunges her into an unsolved mystery dating back to Cromwellian Scotland through World War I and beyond. And as she moves closer to the truth, Sylvie is targeted by a murderer who’s after a treasure within a treasure that could rewrite history . . . and her own future.

Remember, if you choose to read one of Amy’s stories, please consider leaving a review afterwards.

5 thoughts on “A cracking mystery with a Welsh flavour”