Can Josiah solve the puzzle before more people die, or is he out of his depth?

In 1841, at the height of the industrial revolution in the North West of England, Josiah Ainscough returns from his travels and surprises everyone by joining the Stockport Police Force, rather than following his adopted father’s footsteps into the Methodist ministry.

While Josiah was abroad, five men died in an explosion at the Furness Vale Powder Mill. Was this an accident or did the Children of Fire, a local religious community, have a hand in it. As Josiah struggles to find his vocation, his investigation into the Children of Fire begins. But his enquiries are derailed by the horrific crucifixion of the community’s leader.

Now Josiah must race against time to solve the puzzle of the violence loose in the Furness Vale before more people die. This is complicated by his affections for Rachael, a leading member of the Children of Fire, and the vivacious Aideen Hayes, a visitor from Ireland.

Can Josiah put together the pieces of the puzzle, or is he out of his depth? Children of Fire won the Writing Magazine’s Best Novel Prize for 2017

Paul CW Beatty is an unusual combination of a novelist and a research scientist. Having worked for many years in medical research in the UK NHS and Universities, a few years ago he took an MA in Creative Writing at Manchester Metropolitan University emerging with a distinction.

His latest novel, Children of Fire, is a Victorian murder mystery set in 1841 at the height of the industrial revolution. It won the Writing Magazine’s Best Novel Award in November 2017 and is published by The Book Guild Ltd.

Paul lives near Manchester in the northwest of England. Children of Fire is set against the hills of the Peak District as well as the canals and other industrial infrastructure of the Cottonopolis know as the City of Manchester. 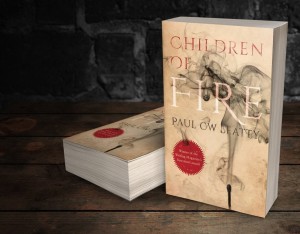 An interesting and original story. As with many historical fiction novels, the story is heavy on details in regards to the setting and the procedures involved in making the explosives. Alongside that information runs a fascinating – if not a little gory – murder mystery, and it is Constable Josiah Ainscough’s job to find the killer of the leader of the Children of Fire. Eager to make a name for himself, Josiah is thoughtful. considerate and attentive in carrying out his duty.

The members of the Children of Fire community welcome him (initially undercover as a traveller), but when their leader, Elijah, is found brutally murdered, they are suspicious of him – and more so when he reveals his true identity as a police constable. Had it not been for Sister Rachael and the hinted-at romance between them, I doubt Josiah would have succeeded at Long Clough, and the openness they share brings another layer of intrigue to the story.

Not content with just the one “love interest”, Josiah is captivated by Aideen Hayes, whom he meets at a social gathering where he is sussing out some of the business owners in the area. His attempts to question them creates friction, but he gets the chance to visit the mines and forges which gives him new leads on the killer. Aideen is on to watch – a determined young woman on a mission. Josiah is on her radar, but is she on his? Should she be?

When it seems the investigation is getting nowhere, a twist in the tale rekindles his hopes and within no time he is on the hunt for the killer, needing to stop his escape and further disasters. The pace picks up considerably at this point, resulting in a compelling chase along the canal banks and a watery encounter at the locks.

The ending presents yet another twist, and brings the story to a satisfying conclusion.
While the story is strong, the book could most definitely do with another pass with a proofreader or editor since there are numerous issues throughout that often made me re-read parts for clarity.

A great combination of history and mystery. Never was the Industrial Revolution so intriguing 😉